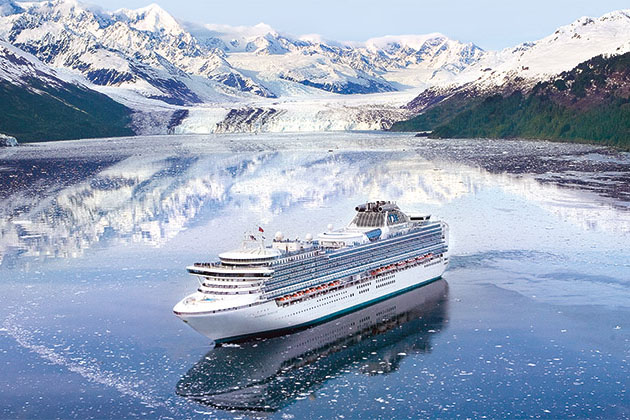 Travel from Los Angeles to the Great Land on an Alaskan cruise vacation that takes you through the legendary Inside Passage and Glacier Bay National Park, a UNESCO World Heritage Site. On your Alaska cruise from Los Angeles, you’ll witness spectacular glaciers, beautiful waterways, forested islands and abundant wildlife. You’ll have relaxing sea days at both ends of your voyage, and visits to the gold-rush era Inside Passage ports of Juneau, Ketchikan and Skagway on every sailing – plus scenic cruising in Glacier Bay National Park. Choose an Alaska cruise from Los Angeles with Princess and learn why we’re number #1 in Alaska. Roundtrip Alaska cruises departing from Seattle, San Francisco and Vancouver, B.C. are also available.

In 1880, it was slow going for Joe Juneau and Richard Harris as they searched for gold with the help of Native guides. After climbing mountains, forging streams and facing countless difficulties, they found nuggets “as large as beans.” From their discovery came three of the largest gold mines in the world. By the end of World War II, more than $150 million in gold had been mined. Eventually the mines closed, but the town Joe Juneau founded became the capital of Alaska and the business of gold was replaced by the business of government. Some 30,000 people live in Juneau. Its total area makes it one of the biggest towns, in size, in the world. Only Kiruna, Sweden, and Sitka, Alaska, exceed Juneau’s 3,248 square miles. Today Juneau is famous not only for gold and government but also for its breathtakingly beautiful glaciers and stunning views of both water and mountains.

Skagway was the gateway to the gold fields for the thousands who flocked to Alaska and the Yukon with the hope of striking it rich. Skagway may have boasted the shortest route to the Klondike, but it wasn’t the easiest. Over 100 years ago, the White Pass route through the Coast Mountains and the shorter but steeper Chilkoot Trail were used by countless stampeders. Many a would-be miner perished on the treacherous Chilkoot Trail. The gold rush was a boon and by 1898, Skagway was Alaska’s largest town with a population of about 20,000. Hotels, saloons, dance halls and gambling houses prospered. But when the gold yield dwindled in 1900, so did the population as miners quickly shifted to new finds in Nome. Today, Skagway has less than 1,000 residents. It still retains the flavor of the gold rush era.

Ketchikan is known as Alaska’s “First City” because it’s the first major community travelers come to as they journey north. Located on an island, Ketchikan began life as an Indian fishing camp. The name Ketchikan comes from a Tlingit phrase that means “eagle with spread-out wings,” a reference to a waterfall near town. In the early 1900s, when gold was Alaska’s claim to fame, fishing and timber industries were established in Ketchikan. The growth of these industries helped make this Inside Passage port Alaska’s fourth-largest city. Visitors to Ketchikan will be intrigued by its rich Native heritage, which includes the world’s oldest collection of totem poles at Totem Heritage Center. The Haida, Tlingit and Tsimshian are all a part of the city’s colorful history. Ketchikan, with its abundance of salmon, is also a sportfishing paradise. Sightseers will be impressed with both the scenic town and its surroundings, especially Misty Fjords National Monument.

These are serene waters, where one moment you can be sailing a wide bay of barrier islands and the next you’re cruising through a narrow waterway flanked by towering forested walls. That’s the splendid spectacle of the Inside Passage – the scenery is constantly changing, from picturesque shores to friendly coastal towns. Stretching from Puget Sound, Washington, through the British Columbia coast and into the Gulf of Alaska, the Inside Passage includes more than 1,000 islands, seemingly endless shoreline and thousands of idyllic coves and bays. Sailing with Princess, you’ll marvel at the breathtaking scenery and encounter ports like Gold Rush-era Skagway, Salmon Capital of the World Ketchikan, the capital city of Juneau and British-flavored Victoria. These are places where you can visit a Native village, learn about the triumphs and tragedies of Alaska’s Gold Rush heyday or go dog sledding with a real musher. The Inside Passage is your gateway to the fascinating and colorful culture, history and sights of the Great Land.

The City of Angels always hovers between dream and reality. Once a near-forgotten colonial outpost, the pueblo metamorphosed into an agrarian paradise before reinventing itself as a movie colony. Perhaps no other city owes so much to the technological innovations of the 20th century, from the automobile to the airplane. Little wonder that LA is oft described as the “dream machine.” In LA, reinvention is a way of life. Yet this talent for change has created a city with a rich ethnic diversity and a sizzling culture. LA is the source for trends that migrate across the country and then the world. Where else can you enjoy a Thai taco or munch on a kosher burrito? Or travel from downtown’s high rises to the beaches of Malibu, shopping in Beverly Hills along the way?

* Prices vary depending upon departure date

We highly recommend insurance. Please inquire about this option as rates are not included in the price.

CALL TO SPEAK WITH A TRAVEL AGENT