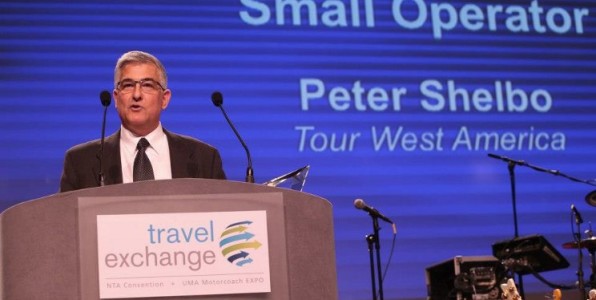 “We are honored, It speaks to the hard work that each of our employees puts in on a regular basis to make sure our clients are satisfied, safe and excited to refer us”
Peter Shelbo, Founder and President of Tour West America[/pullquote]Last week, The United Motorcoach Association (UMA) announced Tour West America, a charter bus service headquartered in Phoenix, Arizona, as the winner of its annual UMA Vision Award for embodying excellence in the motorcoach and charter bus industry. This prestigious award is given each year to one of the over 900 member companies that embodies the best of the motorcoach industry. When determining the recipient of the award, UMA looks for a company that demonstrates sound business practice, excellence in its safety record, good corporate citizenship within the community, and innovating marketing, operations and customer service approaches.

“We are honored to receive this distinguished award,” says Peter Shelbo, president of Tour West America. “It speaks to the hard work that each of our employees puts in on a regular basis to make sure our clients are satisfied, safe and excited to refer us to their friends and family.” Tour West America has been serving the Arizona market for 29 years. In that time they have built a reputation for safety, service and consistency in offering locals and visitors alike an experience they won’t soon forget, from local charter bus operations to national bus tours, even cruises and deluxe vacations, Tour West America has something for everyone.

The announcement of the UMA Vision Award award was not the only recognition that Tour West America received during the 2013 UMA-NTA Travel Exchange in Orlando, Florida. Shelbo and his team were also awarded BusRide Magazine’s prestigious Motorcoach Industry Achievement Award, honoring them as a motorcoach company who has demonstrated drive, excellence and innovation in the industry.

These two separate and important awards are indicators of the excellence that Peter Shelbo and the entire team at Tour West America have come to represent to their customers and to the entire motorcoach and tour industries. “We are so excited to have received these two great awards,” said Peter Shelbo. “We have built a great legacy over the last 29 years and we know that this is the beginning of a new chapter for us. We have to thank our customers, our travel partners and to our entire staff, without whom none of this would have been possible.”

Tour West America has terminals located in central Phoenix, Yuma and Northern Arizona, and boasts an exceptional safety record as one of the nation’s top charter bus operators within the Arizona area. With a fleet ranging from 16-passenger shuttles to 56-passenger deluxe motorcoaches, Tour West America offers tours, vacations packages and charter bus services for churches, conventions, student groups, corporate groups, senior citizen groups, tour operators, military and anyone looking for a greener way to travel to destinations within Arizona and beyond.