5 Gorgeous Places Americans Can Visit Without a Passport 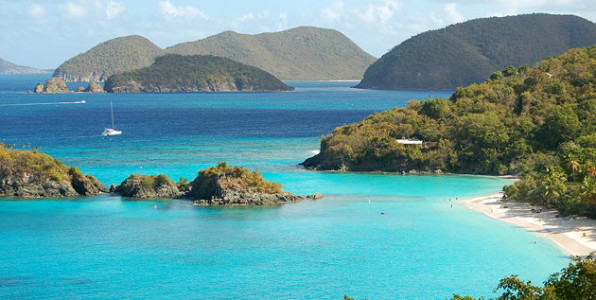 Americans have a bit of a bad reputation when it comes to travel, with only just over a third of citizens holding a US passport. The good news is that this number is steadily increasing.

If you’ve exhausted your travel options within the United States but haven’t yet applied for your passport, there are still some options for you.

Here are five places that don’t require you to have a US passport in order to visit. Even better, they’re some of the prettiest islands in the world.

Puerto Rico is a self-governing commonwealth of the United States in the Caribbean.

Where Is It? Puerto Rico is in the Caribbean sea, to the east of the Dominican Republic and to the west of the US Virgin Islands.

What’s the Weather Like? The temperature is consistent in Puerto Rico year round, ranging between 73 and 86 degrees. The dry season runs from November to May, with the wet season lasting from June to November. The wet season coincides with the Atlantic hurricane season, so be cautious if you plan to visit at this time.

How Do I Get There? There are dozens of flights arriving in Puerto Rico from across the United States every day.

What Can I Do There? One of the highlights of a trip to Puerto Rico is visiting the bioluminescent plankton on beaches in Fajardo and Vieques. Aside from that, pass your days sunbathing on beaches, hiking in the rain-forests, or exploring underwater as part of a snorkeling or diving trip.

The US Virgin Islands is an unincorporated organized territory the United States in the Caribbean.

Where Is It? You can find the US Virgin Islands in the Caribbean sea, to the east of Puerto Rico.

What’s the Weather Like? The climate is tropical, with consistent temperatures year-round. The wet season runs from May until November, with the dry season being December until April. Like Puerto Rico, the wet season brings around hurricanes, so be cautious when booking for during this time.

How Do I Get There? There are dozens of flights arriving in US Virgin Islands from across the United States every day.

What Can I Do There? Spend your time relaxing on the beach, snorkeling or diving with sea-life, or hike in the Virgin Islands National Park. A particularly fun activity is the movie nights on Water Island, which are held every Monday. Hang out with locals on the beach and watch a movie: perfection!

Officially known as the Commonwealth of the Northern Mariana Islands, this string of 14 islands, are a designated territory of the United States.

Where Is It? You can find the Northern Mariana Islands in the Micronesia collection of islands in the Pacific Ocean, between Palau, the Philippines and Japan.

What’s the Weather Like? The Northern Mariana Islands have a tropical climate, with December – May as the dry season, and July – October the monsoon season. The largest island in the territory, Saipan, is in the Guiness Book of Records for having the world’s most equable temperature, at 80 degrees year-round.

How Do I Get There? There are no ferries that visit the Northern Mariana Islands, unless you’ll be traveling by cruise ship. You’ll have to fly from the U.S, on a flight that transits through Guam.

What Can I Do There? The main activity on The Northern Marianas is scuba diving and snorkeling. There’s plenty of tropical coral reefs to be found there, with an abundance of fish, eagle rays, and turtles. There are dozens of shipwrecks to drive among, too, due to the fighting that took place here during World War 2.

While you’re there, you can also check out some of the World War II bunkers at the “War in the Pacific” parks — they even have National Park status!

Guam is a territory of the United States, and the southernmost island of the Mariana Islands archipelago.

Where is It? Guam is in the Norther Pacific Ocean, to the east of The Philippines, and just south of the Northern Mariana Islands.

What’s the Weather Like? Guam has a tropical climate, with December – May being the dry season, and July – October the monsoon season. Be aware that Guam is in a part of the Pacific Ocean called Typhoon Alley — typhoons affect Guam on an average of once every eight years, typically at the end of the monsoon.

How Do I Get There? There are no ferries that visit the Northern Mariana Islands, unless you’ll be traveling by cruise ship. You’ll have to fly from the U.S, typically from Hawaii.

What Is There to Do? SCUBA diving is the main attraction in Guam, which is known for having The Blue Hole, which involves dropping down a hole in a coral reef. You can also dive with two Japanese warships from World War II.

200 miles southeast of Guam is the Mariana Trench, the lowest point on Earth. You can charter a boat for the day to say you’ve been there.

American Samoa is an unincorporated territory of the United States and comprises of six islands.

Where is It? American Samoa is found mid-way between Hawaii and New Zealand, in the South Pacific Ocean.

What’s the Weather Like? American Samoa has a tropical climate but is wet all year round. October – April is the wet season, but it’s not uncommon for it to actually be drier than the dry season! Plan for rain, no matter what time of year you’ll be visiting.

How Do I Get There? Cruise and cargo ships visit Pago Pago, the capital, but your best bet is to fly directly from the United States.

What Is There to Do? Include the National Park of American Samoa on your list, and plan to spend your time beach hopping, diving and snorkeling.

6.  Bonus: The Caribbean if You’re on a Cruise Ship

If you’re going to be going on a Caribbean cruise known as a “closed loop” cruise — starting and finishing in the same US port — you’ll be able to visit quite a few of the countries in the Caribbean without a passport.

The only exceptions are: Barbados,Guadeloupe, Haiti, Martinique, St. Barts, St. Martin (but not Dutch St. Maarten), and Trinidad & Tobago, which require you to have a passport to enter and exit the country.