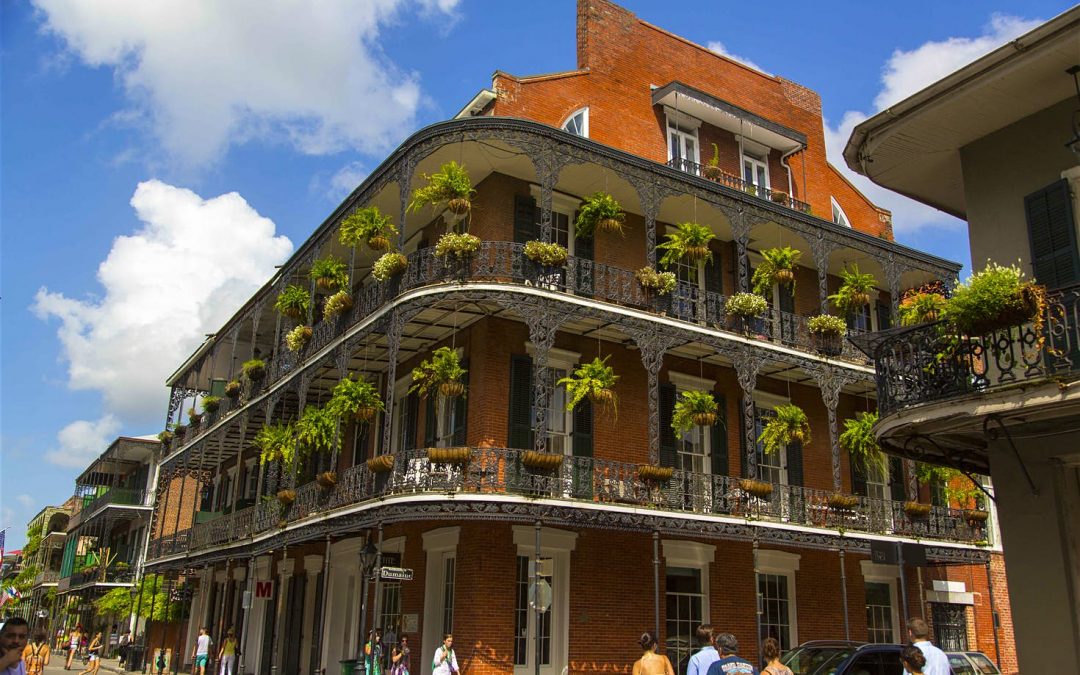 Arriving in New Orleans can seem like turning up to a party in a time-warp. Folk sip cocktails on colonial-era balconies, and restaurants thrum with gossip just like they have done since the 19th century.

But this vibrant city is not stuck in the past. New cocktail bars, inventive eateries and live music joints are turning once gritty neighborhoods into trendy hangouts. Innovative art spaces remain up-to-the-minute. And top-quality museums continue to evolve.

Late breakfast and a history lesson

New Orleans isn’t an early riser, so ease into the day at Croissant D’or Patisserie, a lovely Victorian-styled place with crisp white linens. Or, for more urban hustle and bustle, grab your coffee and powdery beignet at iconic Café du Monde besides Jackson Square.

Next up? A two-hour walking tour of the French Quarter, the oldest neighborhood in the city. Guides delve into architectural highlights, history, and stories of noteworthy locals.

A cramped but loveable den of mayhem, Coop’s Place is where fifth-generation New Orleanians dine on rabbit jambalaya and hearty Cajun specialties. Tradition never tasted so good. A four-block stroll leads to Jackson Square, the bustling heart of the neighborhood, if not the city. Learn your fortune, admire the eclectic artwork, and drop a dollar in the fiddle case of your favorite busker.

The history of New Orleans is told in grand style inside the Spanish colonial Cabildo, the seat of government for the Spanish settlement here in the late 1700s. The view of Jackson Square from the big-windowed Sala Capitular (Capitol Room) is impressive, as is the history of the room: the Louisiana Purchase was formalized here in 1803.

The striking St Louis Cathedral, dedicated in 1794, separates the Cabildo from its twin, the 1791 Presbytere. Pop into the latter for an interactive look at the background to Mardi Gras and the ongoing impacts of Hurricane Katrina.

Cocktails and a dining splurge

For an afternoon tipple, stroll upriver on Royal Street to Hotel Monteleone and take a seat at the circular Carousel Bar, a 25-seat revolving bar, adorned with white lights and gilded mirrors.

Still getting rave reviews after 25 years, Bayona is a place to celebrate. At this ever-evolving hotspot chef Susan Spicer works her culinary magic – on poultry, game, Gulf seafood and local produce – with artistic flair and global inspirations. For something a little more casual, Sylvain is a stylish gastropub winning praise for its simple but elegant Southern fare.

More cocktails, and some music

Nice and brassy at Preservation Hall. Image by Derek Bridges / CC BY 2.0

And no, we haven’t forgotten Bourbon Street. With its neon cocktails and rowdy hordes, this storied street is worth a look, but tourists fill the sidewalks here, not locals. Beyond Bourbon Street, sip classic elixirs at cozily hip Tonique, a neighborhood cocktail bar. Or party like it’s 1799 at Lafitte’s Blacksmith Shop, housed in a red-brick cottage dating to the mid-1700s. End with tubas and trombones played by jazz masters at famed Preservation Hall.

Day two: beyond the Quarter

The St Charles Avenue Streetcar rumbles between the buttoned-up Central Business District and the posh-again Warehouse District. Here, the immersive National World War II Museum drops visitors into the action with life-sized photos from the battlefield, first-person oral histories and an array of fascinating artifacts, including a German Enigma machine. The new section of the museum, the Road to Berlin: European Theater Galleries, follows allied troops on their march through Europe, with stops in the Tunisian desert, an air-bombed Quonset hut and the cold forest of Ardennes.

Around the corner, Southern artists and Louisiana landscapes take the spotlight in the Ogden Museum of Southern Art. For a personal splurge check out the art galleries and specialty shops lining Julia Street. For a quick bite, culinary masterpieces await at Cochon Butcher, home to chef Donald Link’s simple but sublime bacon melts, cubanos and muffalettas. Or hold out for a messy po’boy, coming up next in the Garden District.

From Lee Circle, it’s a quick trip on the streetcar to the leafy charms of the Garden District. For a po’boy, walk five blocks from St Charles Avenue on Washington Street to Magazine Street, which bustles with boutiques and specialty shops. Sitting just one block apart are lively Tracey’s and homey Parasol’s. Their dueling roast beef po’boys share a few key adjectives: delicious, hearty and easy-on-the-budget.

Between St Charles Avenue and Magazine Street, the Garden District’s buckling sidewalks unfurl in the shadows of live oak trees, intricate fences, and grand columned mansions which were built by newly arrived Americans in the 1800s. Weathered and slightly eerie, Lafayette Cemetery No 1 is a Southern gothic island of family tombs and long-forgotten stories. Across the street, dapper Commander’s Palace offers a wink and a drink for the living – who usually dress up for the occasion. Stop by for tasty Creole cuisine and, on weekdays, 25¢ lunchtime martinis.

Freret Street is one of the city’s biggest post-Katrina success stories. This bustling eight-block strip in Uptown was in a state of decline for decades. But the 2009 opening of Cure, an upscale cocktail bar, kick-started a speedy revitalization, with most new enterprises landing between Soniat St and Napolean Ave.

Get your gourmet dogs from Dat Dog. Image by Infrogmation of New Orleans / CC BY 2.0

Today, more than 15 new restaurants, bars and music venues lure stylish evening crowds. Gourmet hotdogs sate the young and hungry at Dat Dog while deep-dish pizzas are the draw at Midway Pizza. The two-patty burgers at Company Burger put napkins to the test.

The things that make life worth living – eating, drinking and the making of merriment – are the air that New Orleans breathes.

Still kicking? Quaff a microbrew and catch a band at steampunky Freret Street Publiq House, or see who’s playing at the eclectic Gasa Gasa gallery. And no visit to New Orleans is complete without a drink at a homegrown dive bar. We recommend the legendary confines of Snake & Jakes. This oversized shed –tarted out year-round in Christmas lights – is a beloved trouble-whisperer.